10-20-13
Gosh, I just realized I had posted a race recap from the Prairie State half marathon last weekend, nor did I share my adventures from spectating the Chicago Marathon-so here goes!!!
I signed up for this race, just coming off the Fox Valley Marathon in mere hopes that it would keep me moving.  I knew this probably wouldn’t be my PR, but heard the course was beautiful and was excited to run a new race.
I initially planned on running it alone…driving up that morning alone, and just using this race as a head clearing mechanism.  But I was blessed that a couple runners from my run club were also running it, as well as a few others who wanted to spectate.  Since spectating this serene and quiet course is advertised as a low point, I was excited to have the support.
Back up, to one week post FVM, where I headed out for my 10 mile run.  I thought, easy peasy, right?  WRONG.
I felt great, until the 8 mile mark when my Achilles tendon in my right leg (bad leg mind you) seized up…CRAP.  NOT NOW.  Not after hundreds of miles of running this summer do I NOW injure myself?
Yup, you guessed it…I was hurting pretty bad.  After 2 weeks of mostly rest and LOTS of ice, I decided I would run the Prairie state half and use it as a training run.  If I hurt, I would stop…I would take lots of pictures, and just have fun with it.  I’ve never DNS’d, nor DNF’d, and this wasn’t going to be my first.
My friend Seth and Don picked me up bright and early, and we met the girls (Kelly, Deb and Christi) at Dick Pond at 5:45.  We all piled into Christi’s SUV and were on our way to Libertyville, IL.
We got to the race, picked up our packets, and I anxiously asked about a dozen times, “what time is it?”  LOL….
It was time to line up-and I felt very nervous…usually half marathons don’t make me nervous, but with my injured Achilles I wondered truly, “Can I run 13.1 miles?”
The course was beautiful…and it was such a blessing to have my friends out there with me, even if I only saw them a couple times.  I knew early on this would NOT be a PR, and hit the turnaround point at 1:02.
For the second half, I decided stopping when needing to stretch, take pics, and cheer other runners on would be how I finished strong.  I was hurting, and I couldn’t mentally get into this race because my leg just simply hurt, from hip to toe.
But…I had fun, and finished with a fairly decent time of 2:13, so I won’t complain.  My friends did amazing, and I was SOOOOO proud of them for their PR’s!
The next day, we got up bright and early again to go spectate the Chicago Marathon.  Let me tell you, I am still in awe of the enormity of this race, and how important both spectators, volunteers and runners are to make this race happen.
Here are a few highlights, for words can’t express the emotion I had today-reliving my very first full marathon! 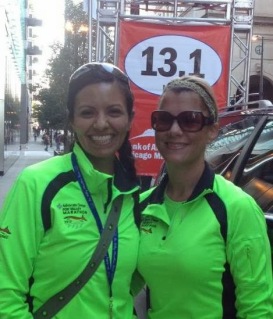 me and Christi at the half way point

All in all, a wonderful weekend, and I would do it all again!!!

This site uses Akismet to reduce spam. Learn how your comment data is processed.

I’d love for you to tag along on my social media sites!

Welcome to my Blog!

Movin' it with Michelle

My name is Michelle and I am a retired Air Force Master Sergeant. I have found a passion for running, cooking, writing, photography and all things that move my love for life! I've ran 3 full marathons, with a PR of 4:25, and 17 half marathons with a PR of 2:00:11 (yup-missed sub 2 by 11 seconds, lol). Thanks for joining me on my journey!

Movies Review in the Hindi Language

Philosophy is all about being curious, asking basic questions. And it can be fun!

I speak my heart out.

Where a little insanity goes a long way

A His and Hers Travel and Lifestyle Blog

My journey through pain, hardship and struggle.

Health, fitness and Nutrition help for all

Personal blog where I express everything that goes on inside this ole head of mine. Some of it hurts and some of it is funny but ALL of it is REAL.

Life is a bubble, Make it as delusional as possible!

Art and Lifestyle by Brandon Knoll

No Time For Pants

Scribblings of a Lazy Vagabond

All I do is eat my fruits, scribble the deets and laugh a little louder :")

FIT for Rest of Your Life